Prestigious two days The Slovak Championship Open was played on September 10 and 11, 2018 at the golf resort Penati near Senica. The tournament was accompanied by excellent weather and played on well prepared course Legend.

Prize money € 10,000 attracted 49 players from seven countries. The winner was Czech PRO player Filip Mrůzek with the result -10 shots under par field. For his balanced game – count individual rounds 69 and 70, 136 shots in total, received a reward of € 2,000. for he finished another Czech professional player Ondřej Lieser (-6, number of shots 69/71, total 140 shots). The best of the Slovaks was Adam Puchmelter (-4, 72,70 wounds, 142 wounds in total) from Lomnice GC, who took the bronze podium. The best amateur player was Pavol Mach with the result of Par Playground (70 and 76, total 146 shots) and occupied divided 5th place together with Slovak professional Peť Valášk (75 and 71, 146 wounds in total).

The prizes were handed over besides the main organizers Petr Petrovič and Pavel Bielik also in the history of Slovakia so far the most successful golfer, multiple Champion of Slovakia and winner of Ladies European Tour 2011 in Morocco Zuzana Kamasová. She also participated in the Slovak Championship Open as a player and finished in a nice 25th place. The Slovak Championship Open is also for women and five players stood at the start. The best was Antony Zacharovska z Lomnického GC, which took a great 8th place in tough competition with a total score of +2 (70/78 wounds, 148 wounds in total).

Filip Mrůzek, as The winner was one of the most satisfied people in the club house after the tournament Penati: “Everything was great, the course was in perfect condition, greens perfectly green, ”he said. “I have to say that this course really does sitting. Overall, the organizers took great care of us, including excellent banquet. “

Filip sa extremely pleased that his he could celebrate the victory with his father, Peter Mrůzek, who belonged to his first congratulators. Filip both fields, Legend and Heritage, considers almost their home. As he says, he has played countless numbers of them times as was seen in his winning game.

Turnaj Slovak The Championship Open has undoubtedly gained a reputation for its short history. This is evidenced by the fact that not only players’ names appeared on the starting list from Slovakia and the Czech Republic, but also from Ireland, England, Switzerland, Slovenia, ba even a professional from distant China.

Satisfaction after the tournament neither the co-organizer nor the competition director Peter Petrovič said: “It has come more players than last year and most of all we got the weather, which is the first basic thing. Many of us remember last year’s heavy rain when the pitch flooded water and forced us to prematurely end Sunday’s PRO-AM tournament. And the amount of rain water marked the pitch. ”

Similar opinion Pavol Bielik, another co-organizer of the tournament, also said. He, too, was delighted from good weather, well prepared pitch and favorable sponsors and hopes to further spread the reputation of the tournament. “On that basis we can already consider that a year would be three days tournament. In short, we look forward to a new year, ”he revealed further plans. This year’s tournament also shot a film documentary Brno TV company headed by Peter Čížek. The document is also broadcast by Golf Channel. 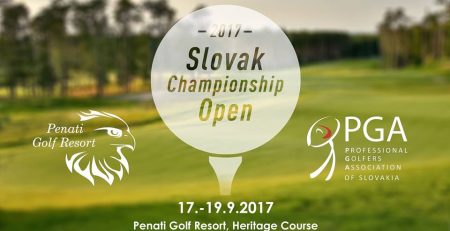